The only other place I’ve seen 2-5/10 is on Ticonderogas.

Nearly identical Evergreen copying pencils made in Czechoslovakia and in USA:

An older ad showing that the Czech versions were actually made by L & C Hardtmuth:

I have seen an ad indicating that Our Drummer is also from U.S. Pencil Co. —

Some of the major German pencil companies had subsidiaries in the United States.  The Swan Pencil Co., based in New York, was a subsidiary of Schwan.  Swan produced several brands —

As evidenced by the wartime plastic and cardboard ferrules, Swan continued to produce and sell pencils during WWII.

General Pencil Company brands.  Others are in the Bowling and Red|Blue posts — 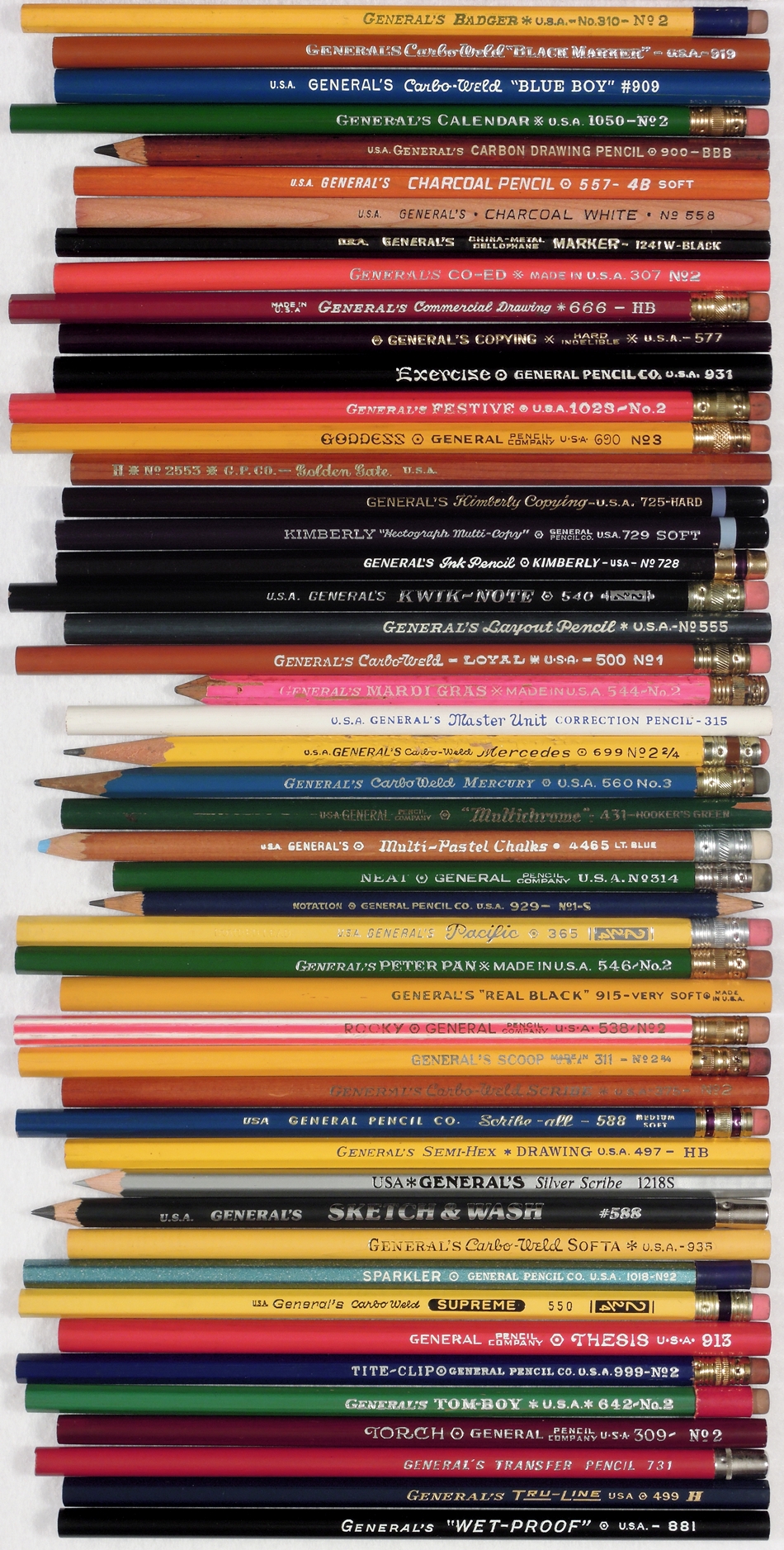 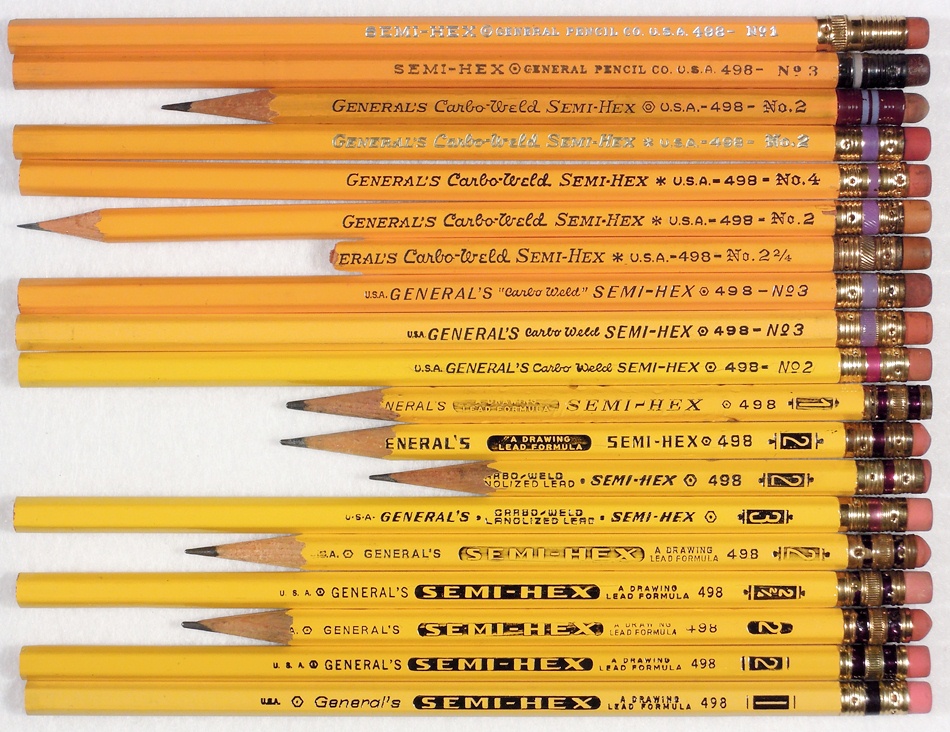 There’s a newer one with green lettering.  I typically don’t have new varieties.

These blue colored pencils all have numbers ending in 3:

Occasionally the product number associated with a particular brand of pencil will change with time, such as when Dixon’s Ticonderoga 1386 became 1388. Usually this change is accompanied by an update in design.  But here are a couple of pairs for which only the number is different:

I suspect that for these, the product number printed on the pencil depended on the manner in which it was sold, for example individually or in a packaged set.

Dixon Beginners 308 is another example of a brand that lasted many decades, over which time there were several variations but no major changes —

What’s up with the green one?  It looks like its competitor, the Venus Scribbler.

Lo-Well was one of many pencil companies that were once headquartered in New York City.  Their main brand was Tech, varieties of which are shown here:

I wonder how popular these were.  Did liquor store owners really prefer to use The Liquor Pencil?  Did priests covet The Clergyman’s Pencil?

Eagle Pencil Company produced a wide variety of writing instruments.  One was an interesting mechanical pencil named Simplex.  It was cheap and came in several styles. 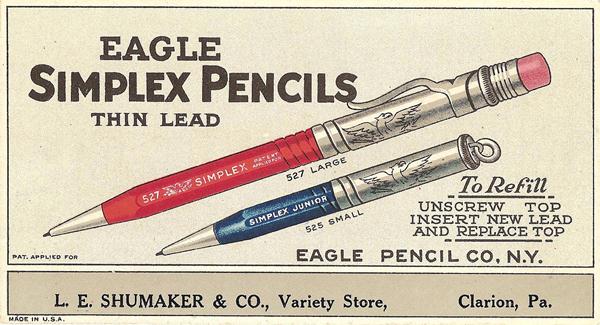 The Simplex has a patented, simple mechanism –

As the metal cylinder is screwed along the outside of the wooden body, a rod pushes the lead forward.

The lead is exposed by tearing off pieces of material around it.  This is similar to Blaisdell’s paper pencils, which were patented a year earlier (1895). 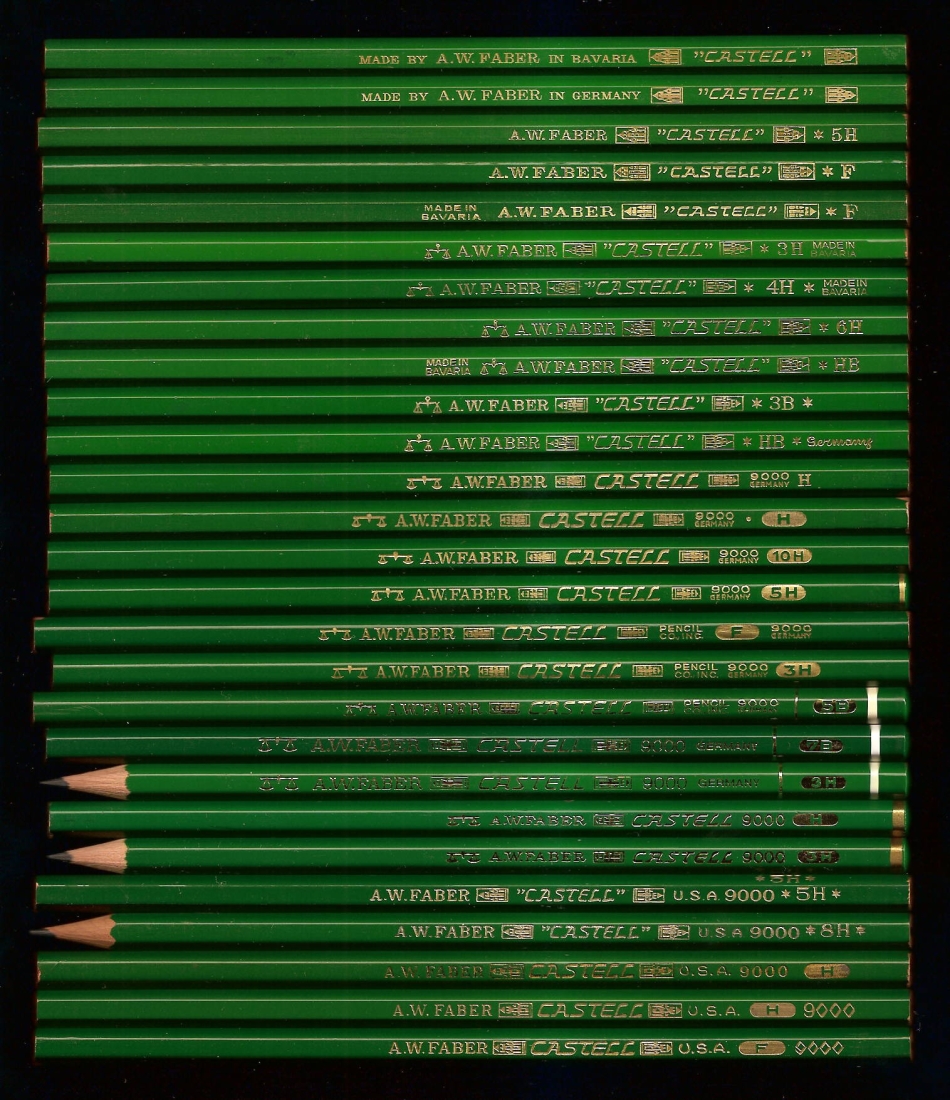 I have others too: without paint, variations of the back side, minor variations in lettering, and an anniversary edition.