Worth the wait, I hope: Pencils with animal names (the type of animal, not Fluffy), having animal logos when possible.  I’ve limited it to one per animal, for the most part.

Of all possible animals, who’d have thought that the camel would be the most popular?  These are from makers in five different countries: United States, Japan, Germany, China, and Korea.

I don’t know what a “suncow” is, but I say it’s a mythical creature.

Finally, we have the Golden ones:

Below are closer views of animal logos.  Click on them for pictures twice as large.

I recently got an iPad and found that large pictures sometimes display with low resolution.

There are just a few pencil companies currently based in the United States, and most of those don’t manufacture pencils in the U.S. anymore.  In the past, however, there were many companies.  There were large, famous companies such as American, Dixon, and Empire; medium-sized ones including Linton, Blaisdell, and Musgrave; and little-known (today) ones such as Lo-Well, Mohican, and Providence.

And then there are the really obscure ones.  They may have served mainly local or specialized markets or have existed for a short time.  It’s hard to say how many actually manufactured pencils.

Here I present a collection representing these companies.  To be included in the set, the companies have to be American and the pencils have to say “Pencil Company” or equivalent.  I possess one to three brands from each company. 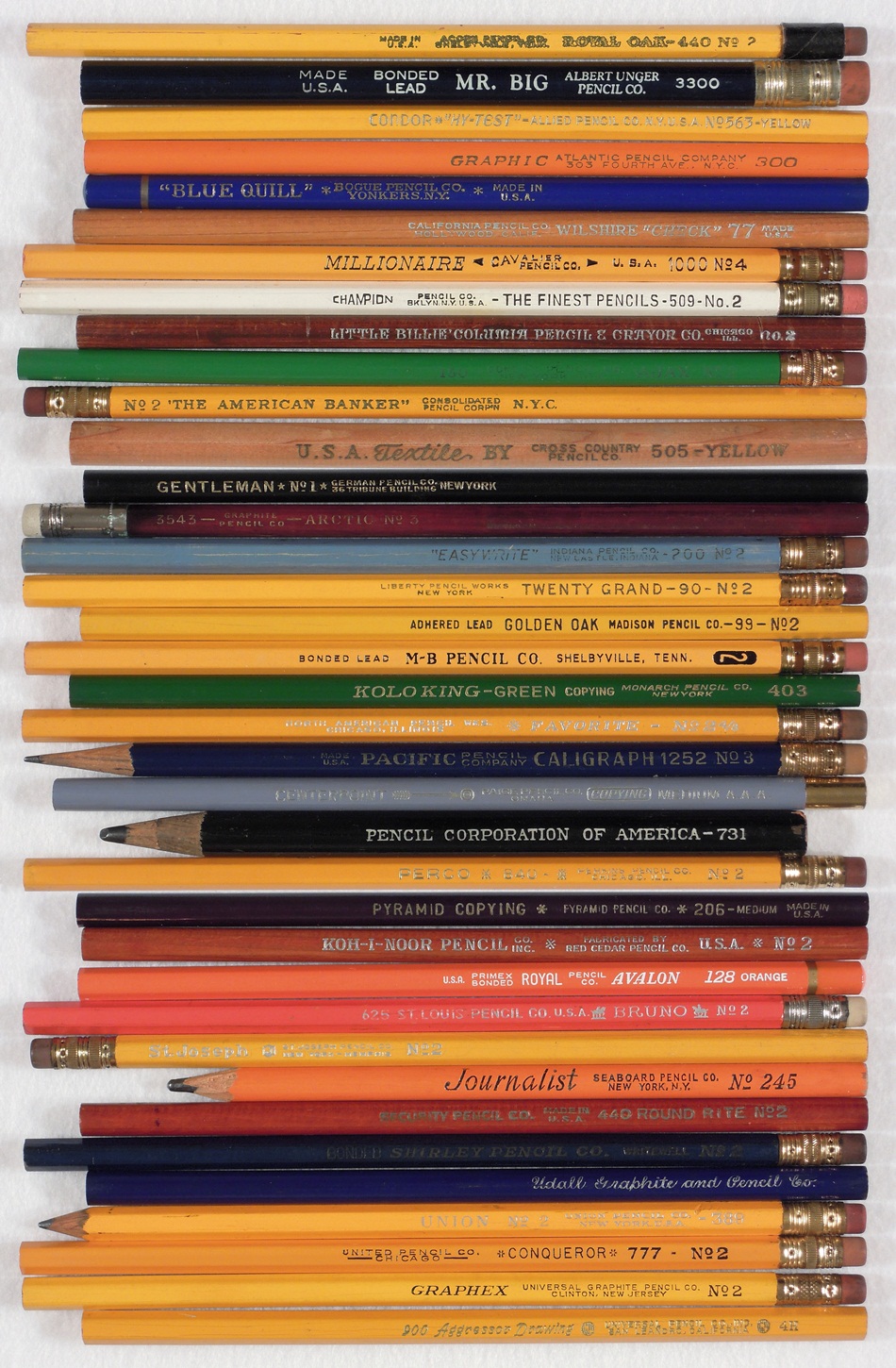 There are 12 indicating New York, 4 Chicago.

Here is a list of what the pencils say about the company and location:

The Red|Blue Collection page now includes German pencil manufacturers: A.W. Faber, Johann Faber, Lyra, Schwan, Staedtler, and others.  Pencils made by these companies in other countries are included.

American pencils intended mainly for writing (as opposed to drafting) often come in a range of grades, with 1 as the softest and 4 as the hardest.  But who actually uses the 4’s for writing?  You’d have to be quite heavy-handed, or perhaps trying to write secret messages.  They are relatively rare.

As a youth, I used to go bowling often.  There were special pencils for keeping score.  Despite pangs of guilt, I made off with them if I needed them for my collection.

The leads of these bowling pencils are of two general types: Thick graphite for paper, and opaque yellow or white for overhead projector transparencies.  The latter are fairly easy to wipe off.

Note that Blaisdell, Moon, and General all made ones having the product number 300, the score of a perfect game.  And General has five different brands!  A couple of their numbers are frustratingly close to 300.

I have others too: without paint, variations of the back side, minor variations in lettering, and an anniversary edition.

Imitation is the sincerest form of flattery, so they say.  Here we have Staedtler’s venerable Mars-Lumograph, with its iconic blue color and black tip with white band.  And then, many imitators.  (Or perhaps it’s “just a coincidence.”)