In honor of the recent 238th anniversary of the American Declaration of Independence in 1776, I present to you a very special pencil produced for the 100th anniversary in 1876.

Appropriately, it is Centennial, from the American Lead Pencil Company.

The pencil is triangular, with red, white, and blue sides: 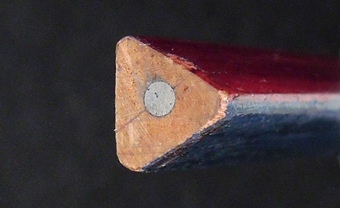 I also have this Centennial 1876 made somewhat later by Dixon.  But in my opinion, it’s not quite as nice:

A round Eagle Mirado, paired with the hexagonal version:

While it’s fairly common for a particular brand of pencil to be made in different forms, usually the models are given different product numbers (Mongol 480 and 482, for example).  Here, both are 174.

Kapoff, from American Pencil Co., has a bottle opener on top —

The metal piece on this Eagle pencil says “Spark-Tip” —

I once thought it was for producing sparks (but why?) or lighting matches, but I couldn’t see how it would work.  Now I think it is for testing spark plugs, although I don’t know exactly how.

My favorites of course are these Tape-Measure pencils —

Often I’ll present pencils having unusual shapes and sizes.  One of my favorites is the “tapered” shape.  Tapered pencils all seem to be quite old — 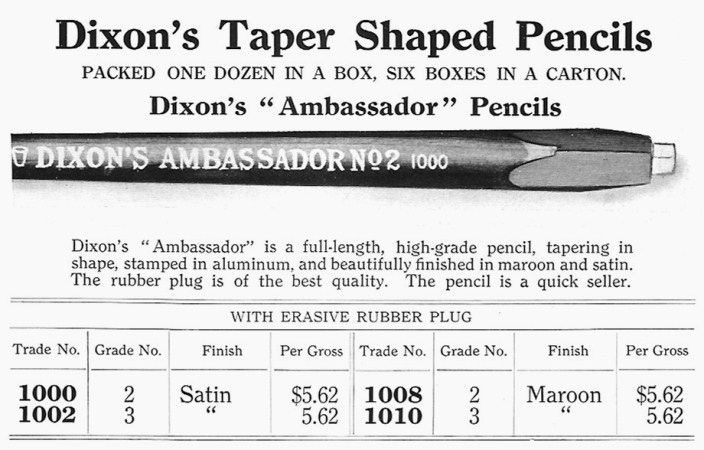 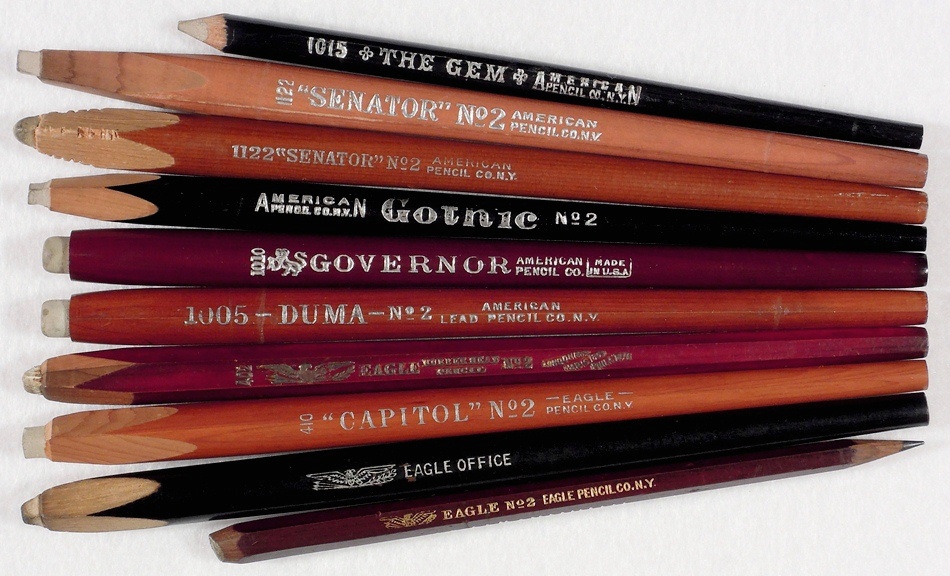 I find them uncomfortable to hold.  It feels like the pencil is getting squeezed backward.

This Egypt-themed one has a square cross-section, which makes the eraser end a pyramid — 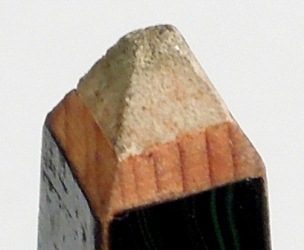 This one is very special —

It is a Mongol 482, but very different from the standard model.  It has a hexagonal cross-section that transitions to round and tapers down.

Advertising pencils could also be tapered —

I also have a tapered mechanical pencil —

These are dressmaker’s pencils, for marking patterns on fabric.  The brush is for wiping the mark off afterward, as ordinary erasers would be inefficient.

The top three are somewhat vintage.  I’ve got some newer Dritzs, but they are mint in package, and I wouldn’t want to limit their investment value by removing them.  That’s tongue in cheek (an idiom, my foreign readers), of course.  Yet I’ve always been reluctant to remove pencils from their blister packaging, even though I’d prefer to put them with my other pencils and save space.  And eventually, the glue on those packages disintegrates and the pencils fall out anyway.

Herbert Hoover ran against Al Smith in the 1928 U.S. presidential election.  Pencils topped with their likenesses, and others with broom-related slogans, were part of the campaigns — 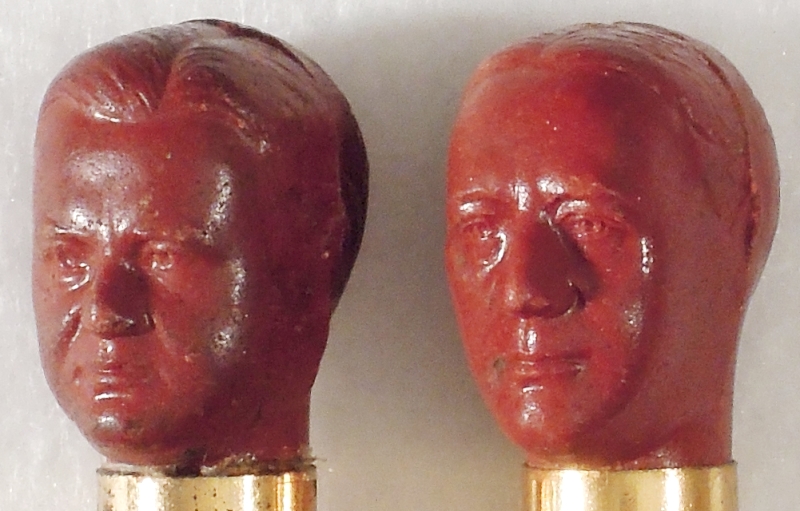 The candidates battled head to head, but Hoover’s ultimately won.

In honor of the upcoming presidential and general elections in the United States, presented here is a collection of specialized pencils for marking ballots.  All of them have (or had) a means of being attached to a voting booth — either a built-in string, or a ring or hole for attaching a string.  Several have indelible leads, although they don’t say so. 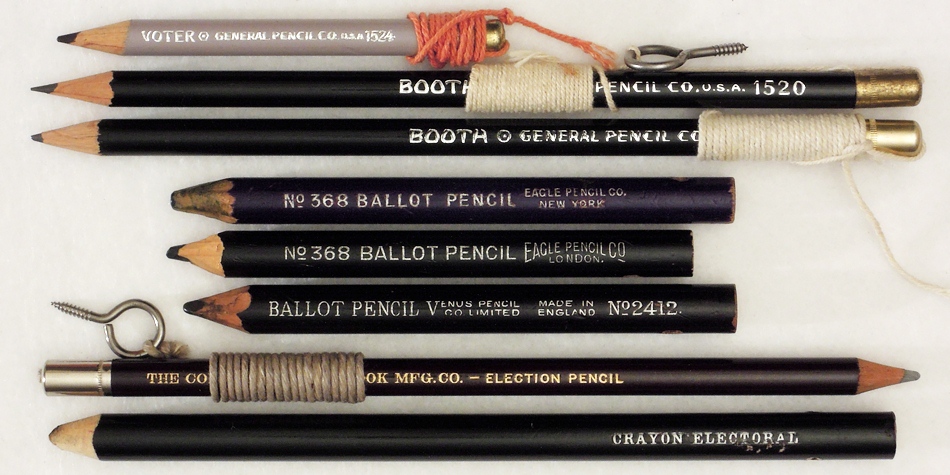 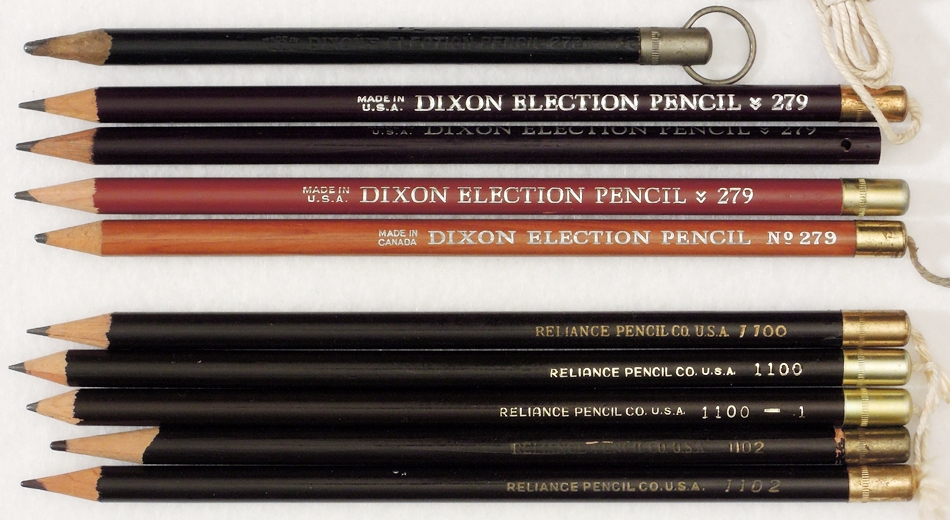 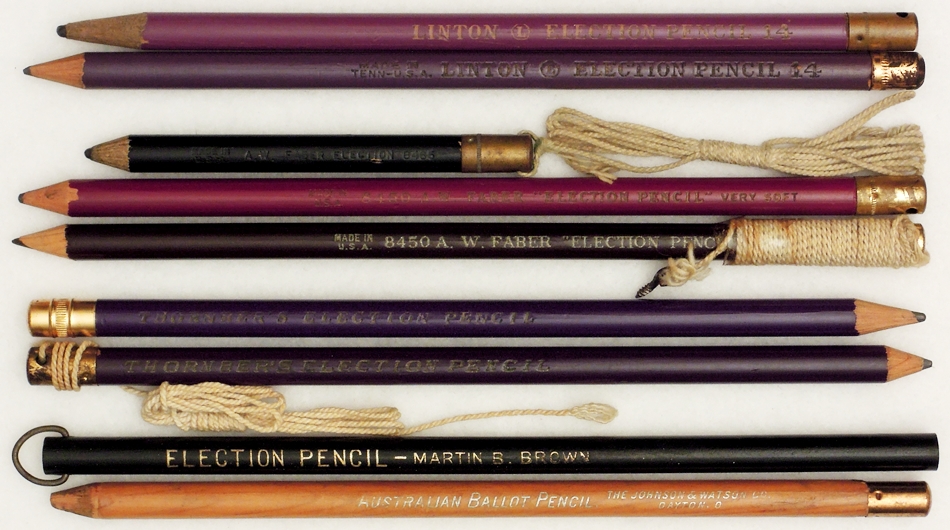 Some of these special pencils came into my possession after being literally ripped off.  I personally would never do such a thing.

The Amazing La-Stil Pencil is round, yet doesn’t (easily) roll!  Novel, useful, and great for clever advertising slogans.  Only $0.0435 each, in bulk —

Its secret is a piece of lead, embedded off-center near the end —

You can make a real LEAD pencil out of it! — 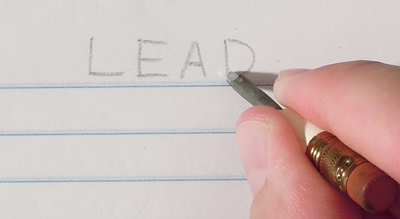 Let’s start with several from Hawaii, where I used to live — 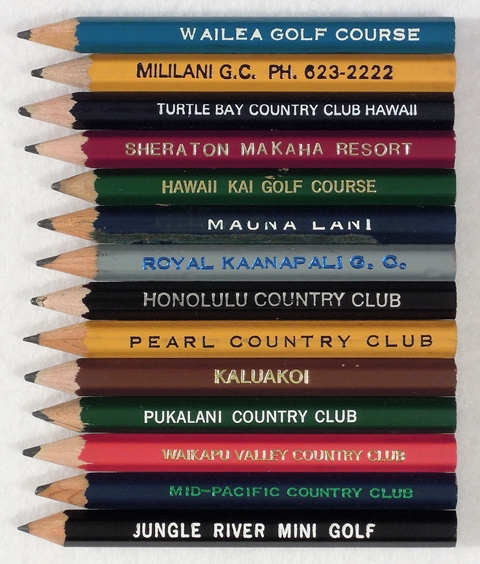 And then some brand-name types —

The Dixon is obviously a truncated Ticonderoga.  But I haven’t seen a Ticonderoga of that design.  Probably it was never sold, and the existing stock made into golf pencils (similarly to the Student).

The famous comic-strip characters Blondie, Dagwood, and Popeye were honored in a set of pencils made by Linton —

Their likenesses appear on special Ad-Tip ferrules, which were more commonly used for product advertising.  (I’ll show examples another time.) 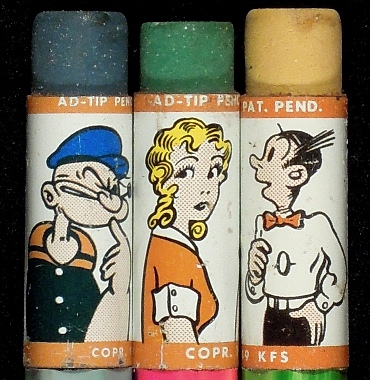 Watch out Dagwood, Popeye is eyeing your wife!

For the final installment of red and blue lead combination pencils, I present wooden ones that are 8 to 9 inches long: 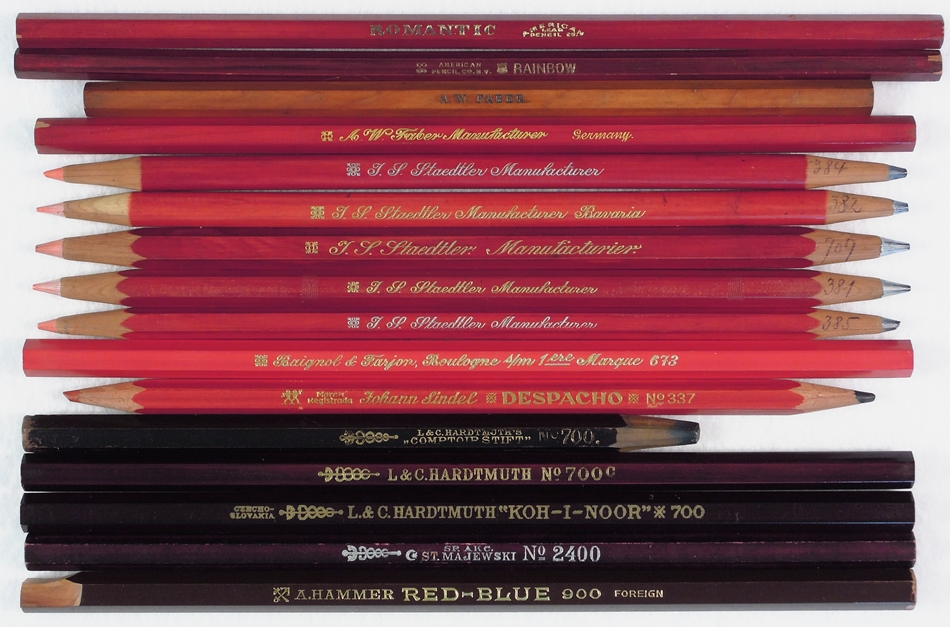 As for the intended purpose of these pencils, I would say that the Romantic and Rainbow are novelty items.  Despacho from Johann Sindel indicates something to do with shipping.  And the Hardtmuth and St. Majewski pencils bear the medical caduceus symbol.  Why is it useful for medical pencils to be so long?  Maybe so that doctors don’t have to bend over quite as far to mark charts that are tied to patients’ beds.

Now for some statistics.  I have shown a total of 307 red/blue pencils, not including the mechanical ones.  77% have the red lead on the left, blue on right. — But for U.S.-made ones, only 60% are oriented this way, while 88% of non-U.S. ones are.  74% have left and right sides painted red and blue (or with colored marks left and right). — But for one of these, the leads don’t match the paint!  (Can you find it?)

For art and drafting pencil brands that come in a wide range of grades, the softest leads have larger diameters than the others.  This is so that they make heavy lines and don’t wear down too fast.  The wood around these leads is quite thin.  Nowadays this is not a big problem for manufacturing, but in times past, 6B (and softer) pencils were made thicker than the rest —

Here are some examples: 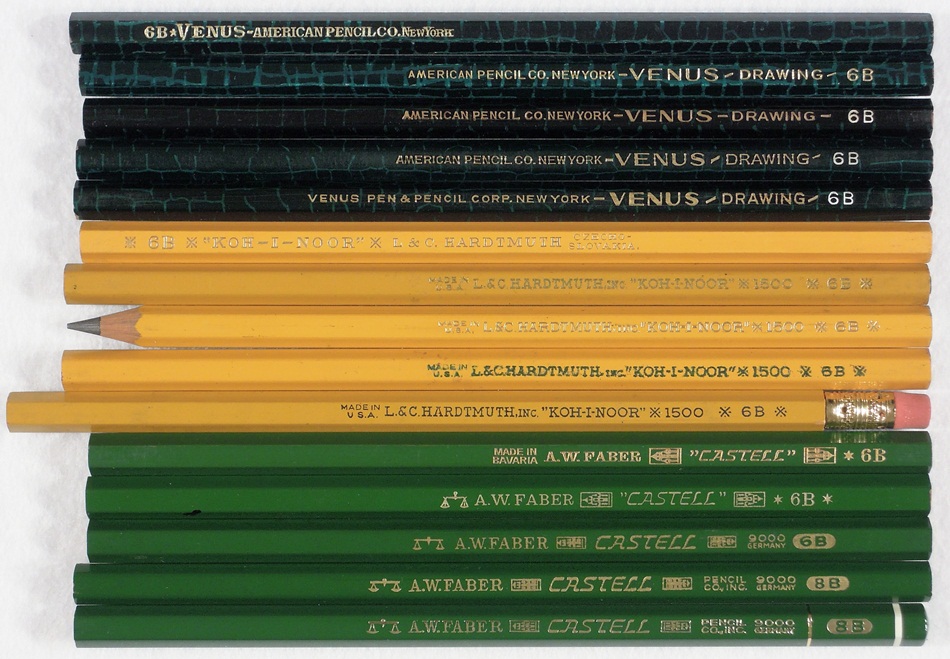 These pencils are about 20-25% wider than normal. 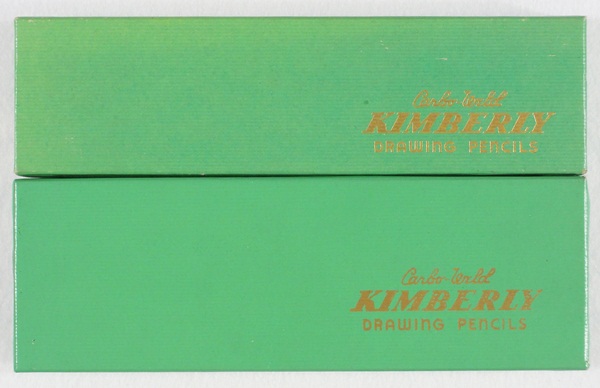 Large-diameter pencils.  Red ones, with erasers — 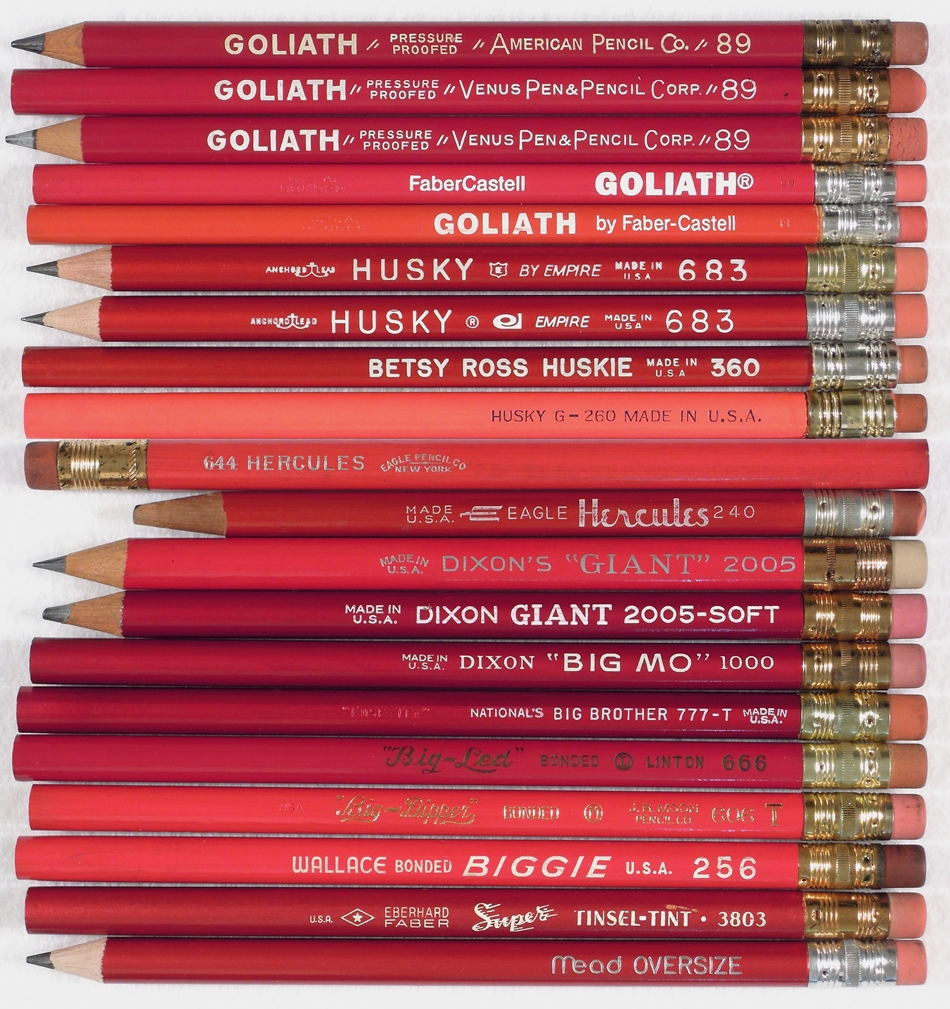 Most are also slightly longer than regular pencils.  They all have names suggesting bigness. 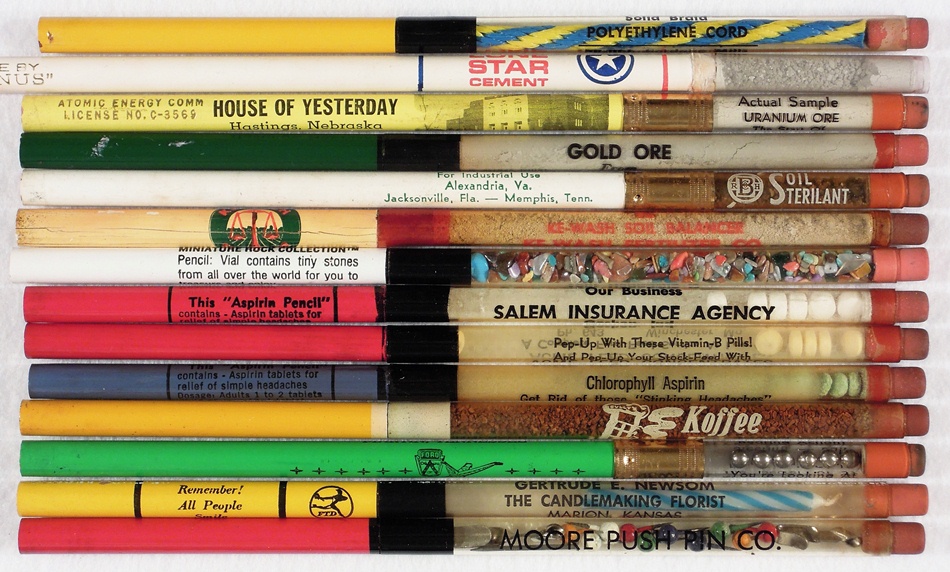 The Moore Push Pin Co pencil, with pins and hooks inside, is my favorite.

A bullet pencil and a couple of other items —

I have added American pencil companies to the Red|Blue page.  Naturally enough, these include American Pencil Co. and United States Pencil Co., and many in between.  (Eberhard Faber is already elsewhere.)

Here are pencils with rings on the end, good for hanging by the telephone —

It’s an interesting coincidence that one is called Saturne, while another is made by Saturn, a German pencil company.

And some larger ones —

Most modern pencils are “right-handed,” the text being upright when held for use by a right-handed person.  Many very old pencils have a “left-handed” design.  Here are some with both handednesses:

The upper Laddie is probably an error, with the wrong end factory-sharpened.  But it would be a lucky find for a left-handed student.

Blog note: I just got a new job in a new location, so postings will be less frequent for a while.  But keep visiting.  I’ve got lots of great things to show you!

More for the Red|Blue page: Pencils from Italian companies (Fila, Presbitero, FIM-Torino), Eberhard Faber, and Hardtmuth, plus the Checkpoint brand.

Would you say that this one is best described as right-handed, left-handed, or other?

Behold, the Itoya Pencil-Pen, a ballpoint pen fused to a wooden pencil:

What will they think of next?

The Red|Blue Collection page now includes German pencil manufacturers: A.W. Faber, Johann Faber, Lyra, Schwan, Staedtler, and others.  Pencils made by these companies in other countries are included.

Good-quality mechanical pencils with product advertising on them used to be given out by salesmen.  But some of these advertising pencils went further, containing visible samples of actual products inside them!  There were different pencil styles as well as a surprising variety of products — 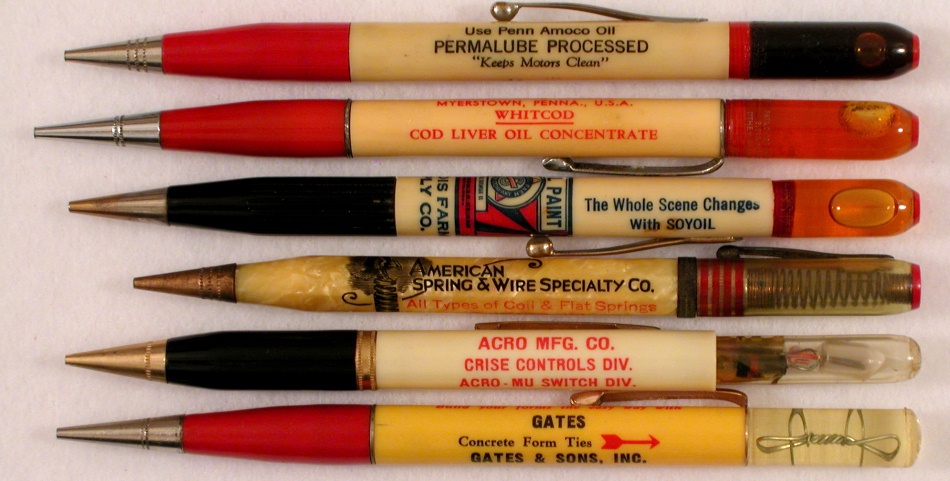 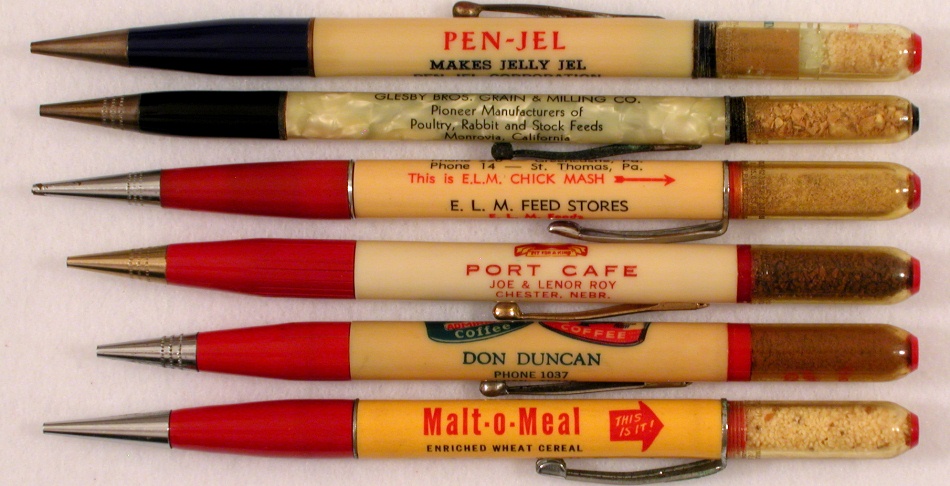 By observing these items, I learned what sorghum, soy, and chick mash look like.  I can also now recognize Mineral Jig Concentrate if I ever come across it,  although I have no idea what it is.

I had more samples of liquid products, but many of them leaked out or turned to sludge.

Continuing with the red/blue theme, here are appropriate mechanical pencils and ballpoint pens.  I am showing them here but reserving the Red|Blue Collection page for wood pencils. 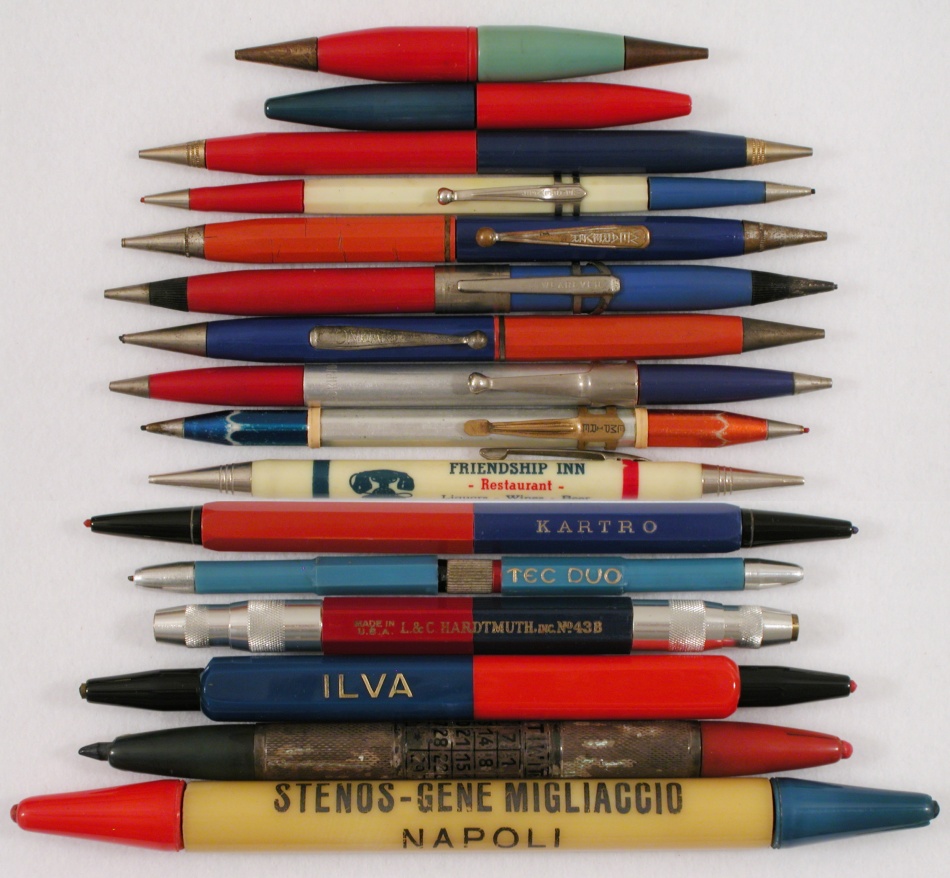 Starting with the fourth pencil down, the brands are Wearever (x3), Onward, Scripto, and Empire.