Pencils from Stanford University, my Alma Mater.  These are from 1980-1991.  Note that the price of a pencil gradually increased from 20 cents to 39 cents.  Seems like a lot, but it’s less than the rate tuition increased. 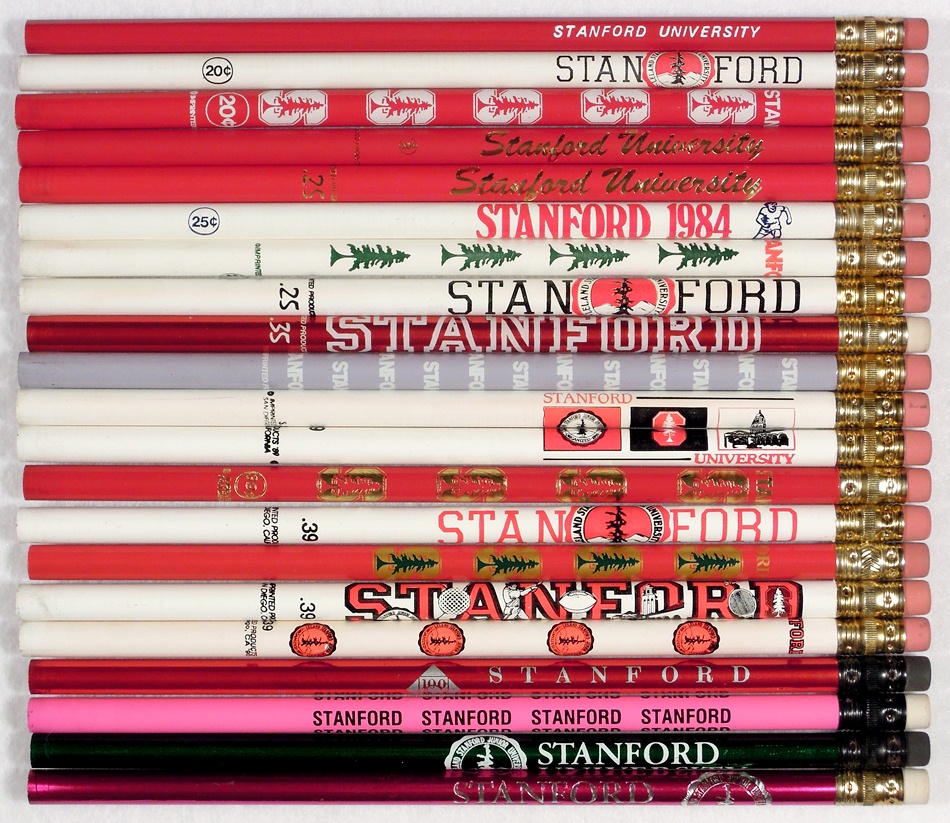 Worth the wait, I hope: Pencils with animal names (the type of animal, not Fluffy), having animal logos when possible.  I’ve limited it to one per animal, for the most part. 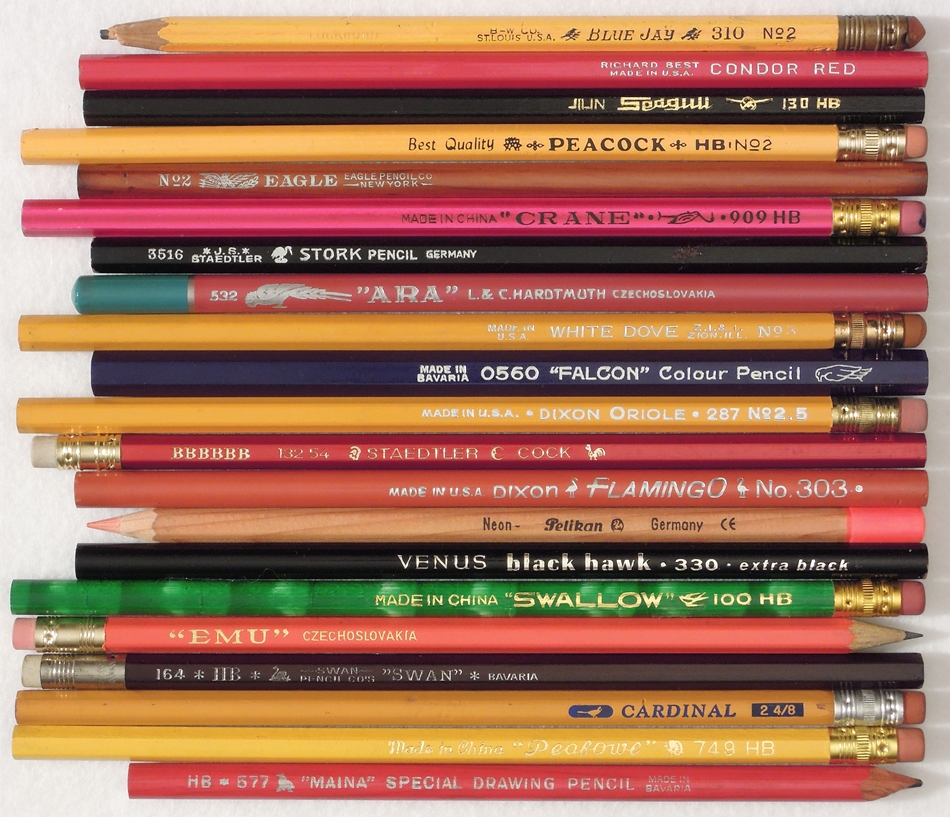 Of all possible animals, who’d have thought that the camel would be the most popular?  These are from makers in five different countries: United States, Japan, Germany, China, and Korea.

I don’t know what a “suncow” is, but I say it’s a mythical creature.

Finally, we have the Golden ones:

Below are closer views of animal logos.  Click on them for pictures twice as large.

I recently got an iPad and found that large pictures sometimes display with low resolution.

FRED’S PENCILS received its 20,000th click yesterday!  My thanks to all of you.

In celebration of this day, the Fourth of July, Independence Day of the United States of America, I have the privilege to present to you: Patriotic Red, White, and Blue pencils of all kinds. 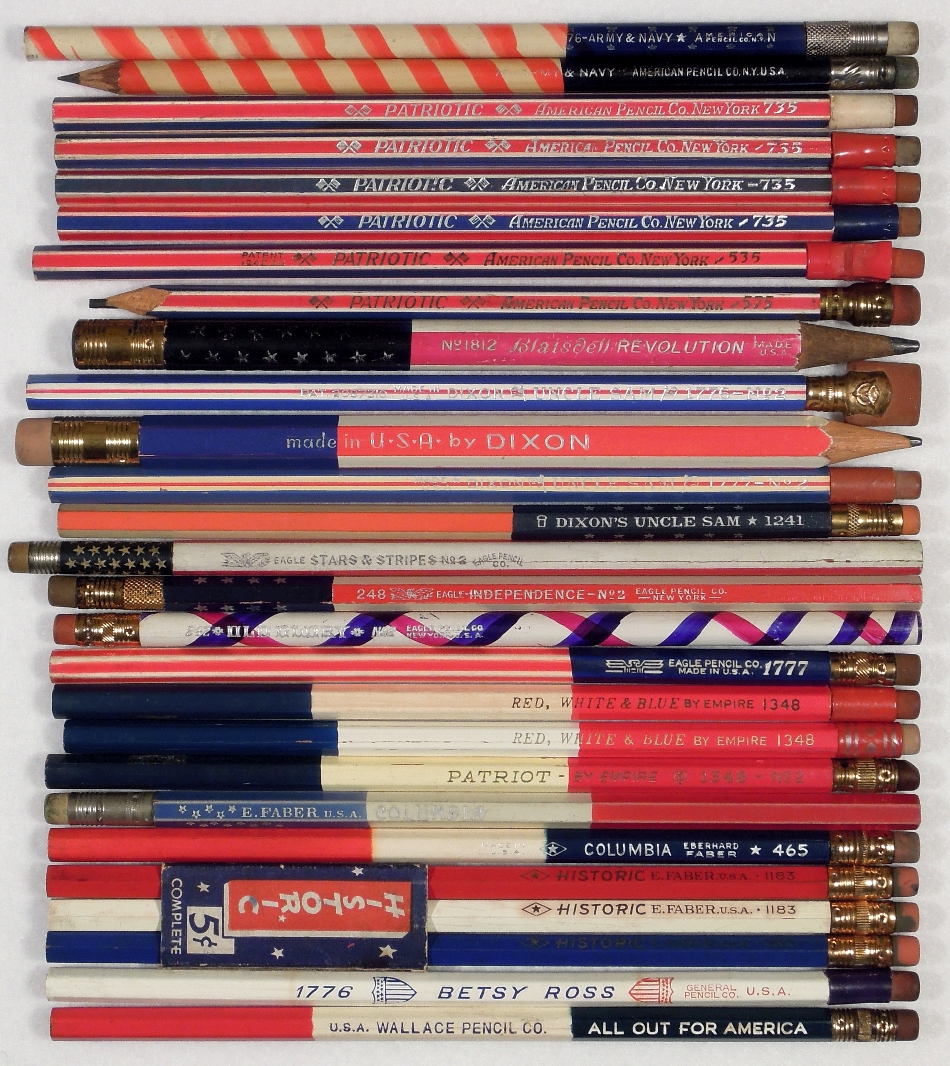 Secondly, small packs of pencils referring to our military might during World War Two (including that of our Canadian brothers-in-arms) —

Thirdly, patriotic slogans from WWII and after —

(That last one is kind of disturbing.)

And finally, a beautiful bundle of Stars and Stripes —

I have a little collection of vintage pencils from colleges and universities in the Philippines.  Maybe you have never seen such a thing…

Well, now you have.

I also have several brand-name types made there —

The Eberhard Faber ones have a “MADE IN PHIL.” imprint.  The Master’s has an MPC logo; presumably this stands for Master Pencil Co.

When I first saw one like the Ruwe Hospital 4/8, I thought it actually had an extra-soft lead.  A quick test proved that it didn’t.  Obviously (in retrospect), a leading “2” was intentionally omitted on these pencils.  This was apparently done so that the numbers in the fractions could be large and oriented in the same direction as was used for the 1, 2, etc. hardnesses.

But even when the style of the Blue Band changed and truncation of the numbers was no longer appropriate, it was initially retained —

In an earlier post, I showed that pencil companies have distinctive ways of expressing a 2½ lead hardness.  They also have come up with unusual hardnesses and corresponding lead numbers — 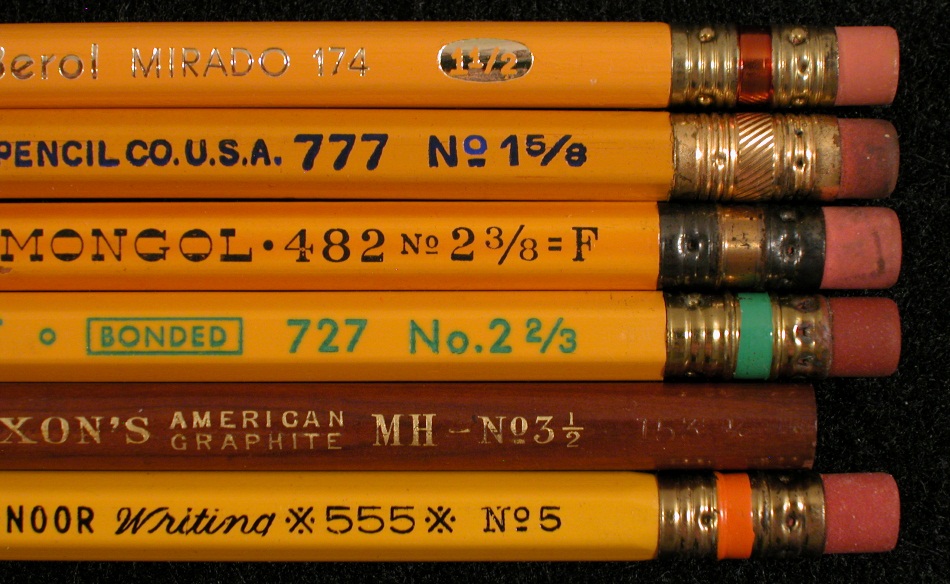 Theoretically, that would be just a tad harder than the Berol Mirado’s 1½.

The Eagle card also provides details of an old B/H system that was used for high-quality art and drafting pencils.  They squeezed an FHB between HB and F.

F is not an unusual grade, even for regular pencils, but only Eberhard Faber put it equal to 2-3/8, as far as I know.  According to this Berol Black Warrior, F (literally, F2½) is equal to 2½:

On this, my 50th birthday, allow me to engage in a bit of personal nostalgia — pencil-related, of course.

My earliest memory of brand-name pencils is the thick round General’s Blue Boy issued to us in first grade.   In third grade, students earned their first “grown-up” pencils by demonstrating good handwriting skills.  It was a big deal, and I was frustrated at being one of the last kids to achieve this milestone –

We got a classic yellow pencil, the Ravenwood by Reliance.  This was the official brand for the rest of elementary school.  It was a revelation to me when I discovered that it came in different lead hardnesses.  My interest in pencils was piqued, but I was not yet a collector.

Then, in sixth grade, I picked up an odd object on the playground —

It was obviously a pencil, but very different from a Ravenwood — two colors, a different metal part, and a really strange “2A” lead number.  Intriguing!  Fascinating!  I kept it.  I can pinpoint my becoming a PENCIL COLLECTOR to this event, this pencil, thirty-eight years ago.  But I still don’t know what that “A” signifies.

After that, I would ask my classmates, “Can I trade for that pencil?” when they were holding a pencil that I needed.  I was also an avid scavenger, always scanning the ground for dropped pencils.  I am not sure why, but on rainy days I could always find several pencils on the school grounds.

Junior High in the 70’s was a hotbed of pencil fighting, and I was there to pick up the pieces —

In high school, I constructed this display of my pencils:

It is a presswood board with 840 holes I made with a hand drill.  I used clear nylon fishing line to tie up the pencils.  I was very proud of that thing.  I put it on my bedroom wall and could hardly stop looking at it.

In the summer of 1980, I displayed my collection in the hobby exhibit at the San Diego County Fair.  My sister had won First Place honors there for her troll collection, and I wanted the same glory.  I did win a First, which was great.  Something bad happened, though.  The display was covered with a sheet of clear plastic, but someone worked one of the pencils out and stole it.  I lost all faith in humanity that day, along with my irreplaceable, square-shaped, dark metallic blue, MechaMania Boy pencil from Japan.

Also at the Fair, I received a note inviting me to join the American Pencil Collectors Society, which I was excited to do.  In accordance with proper etiquette, I had Member pencils made and traded them —

(I am not currently trading any pencils.)

Finally, here are pencils from some places where I have worked: